I joined the Blaseball Community extremely early on, midway through Season 2, and my interests were piqued very early on in this process in the kind of storytelling which statistics and other information reveal, having previously spent too much time appreciating the works of Jon Bois and others. As such, while I don’t have a special aptitude for either the archival / programming / or SIBRmetrics efforts of SIBR, when the Eat the Rich Decree was passed in Season 3 I thought that I could apply some of my economics interests and background in considering and understanding it.

Since that point in time I’ve been relatively central in the efforts to try to record the ETR values and during the Short Circuits, helped by Frostbird, did some Betting Surveys during the Short Circuit series. This said, compared to other areas which SIBR researches, fundamentally we do not have any real endpoints of data or information related to most of the broad level economics data that we have available to us. In the past we have been able to infer the size and shape of the economy by reviewing total known spending as visible through publicly visible votes spent into decrees, blessing, renovations, and other sinks, but as always it is an imperfect data set. Tools like the ETR survey has provided us with a huge amount of discreet information which is potentially helpful, like the below graphics I created in some of the early seasons. 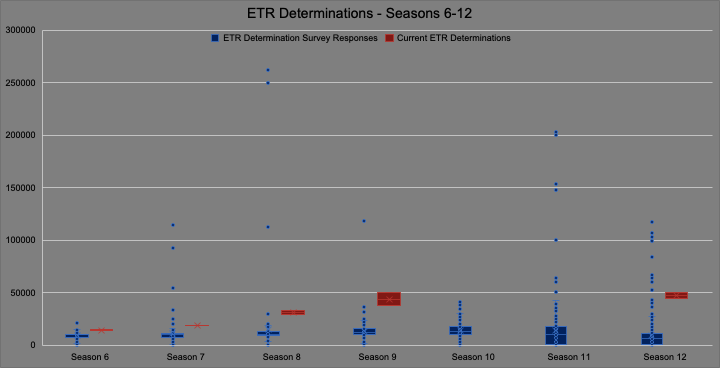 But for us to be able to employ a survey, it needs to be discrete and specific and notable in measurement - this is why some specific event, like the triggering of the Eat the Rich decree, is ideal for this. When we did follow up with the Short Circuit surveys, our response rate fell greatly, likely for a variety of factors, but from my perspective very largely from the fact that there wasn’t really a specific discrete economic event to engage with. This is why we ended up not engaging with a survey for the third Short Circuit series, as while we could we were not confident on it’s representiveness being useful or usable.

What does this mean for the future of economics research in Blaseball?

Well, it means that we’re likely left in the very unsatisfactory position of “It’s complicated and it depends.” I and others will certainly be on the lookout for things which are measurable and observable within the Blaseball economy to see if there is sensible ways they can be engaged with in trying to get to usable economic information out of. Otherwise, most of the nature of economics research would be simply expected value and optimization analysis based off of information we have present about player performance and the nature of bets / income sources available in the game. While important to do, honestly I will admit that the nature of this research is somewhat less interesting in some senses.

So yes Blaseball fans, there is not much news at this point in the economics department for SIBR. Get up and stretch, touch some grass, put on the kettle and make some tea. We’ll likely find something interesting of note, but finding it and how we can measure it will take time and perspective - for fans of Blaseball from prior, it might be a bit of a change of perspective, although hopefully much healthier paced. For new fans, hopefully we’ll have something soon enough that you all will be able to engage with.