In the lead-up to Blaseball returning, new rosters were built for the 24 teams from returning players from Beta. There are many questions about the whole process, such as: Where did these players come from? Who has the best team? Where’s my favorite player Castillo Turner? And other questions that I invented. Hopefully by analyzing Fall Ball I can answer some of these questions, some with more satisfying answers than others.

Who was eligible to fall?

This is an open question. We can safely assume that players in the Hall of Flame as of Season 23 (more on this in a bit), the players who started on the Oxford Paws, and players from Pre-History who were not on one of the main 24 teams as of Season 24 were not eligible to fall. By the end of the Expansion Era the Hall of Flame contained over 200 players, which was the maximum number the Hall of Flame could display, and the vast number of Pre-History teams, most of which had 25 players on their roster, make the scenario where none of them fell very unlikely.

With the arrival of Pudge Nakamato and Parker MacMillan, we know that the pool contains the rosters of the main 24 teams from somewhere in Season 24, as they roamed respectively from the Hall of Flame and the Vault Legends to the Philly Pies and the Hawai’i Fridays. The only question is when in Season 24. A number of players falling could have confirmed this: players from the main 24 teams who ended up on the Oxford Paws and the Carolina Queens, players who were redacted in Season 24 and not attracted via the Secret Base, any of the players who were individually incinerated in Season 24 and their replacements, or Castillo Turner, who roamed to the Dallas Cows on Day 99 with the Fifth Base just as they were nullified.

Therefore we need to make a judgment call. For the purpose of this article I am assuming that the pool of players eligible to fall contains all players who were on the roster of one of the main 24 teams as of whichever day they were nullified by the Black Hole(Black Hole) in Season 24, which comes out to 800 players.

What teams did the players fall from?

Whereas each team received exactly 10 players, the roster size of the main 24 teams varied widely, ranging from 57 players on the Garages roster to 24 players on the Georgias and Jazz Hands roster. With players being spit out of the Black Hole at random, some teams would naturally be more represented in the new rosters than others.

(Chart showing how many players fell from the Season 24 roster of each of the main 24 teams.)

As expected, the two largest rosters, the Garages and Tacos (57 and 56 players respectively) had the most players fall from their team, with 18 each. The rest of the league however varies widely in how well represented their Season 24 rosters are. 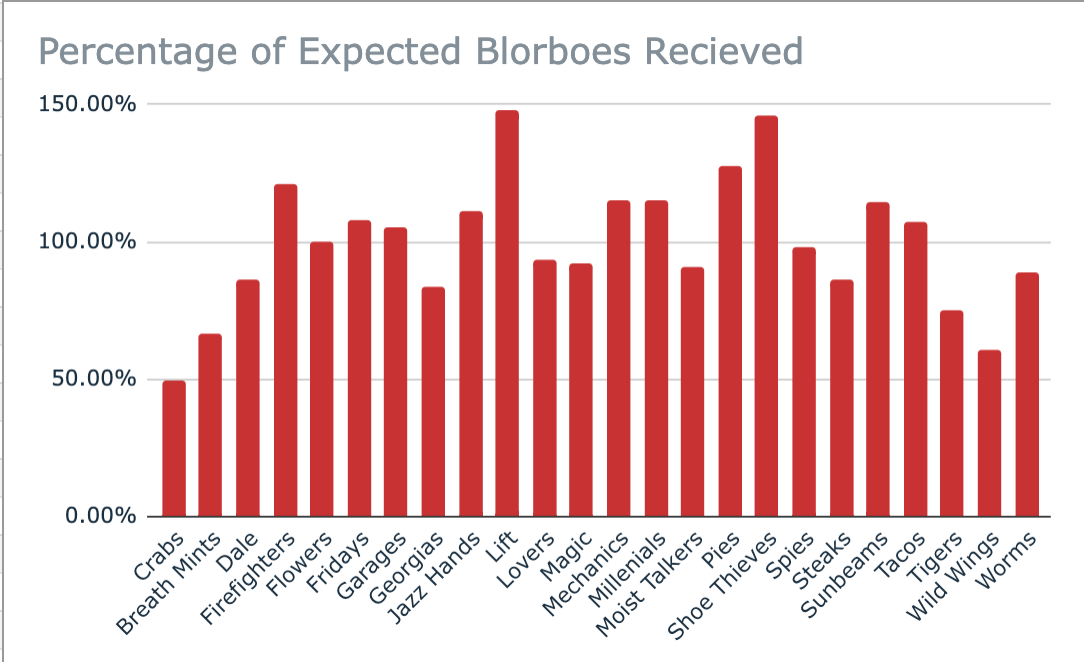 (Chart showing how over or underrepresented each team’s Season 24 roster is, courtesy of Lucien on the SIBR Discord server.) 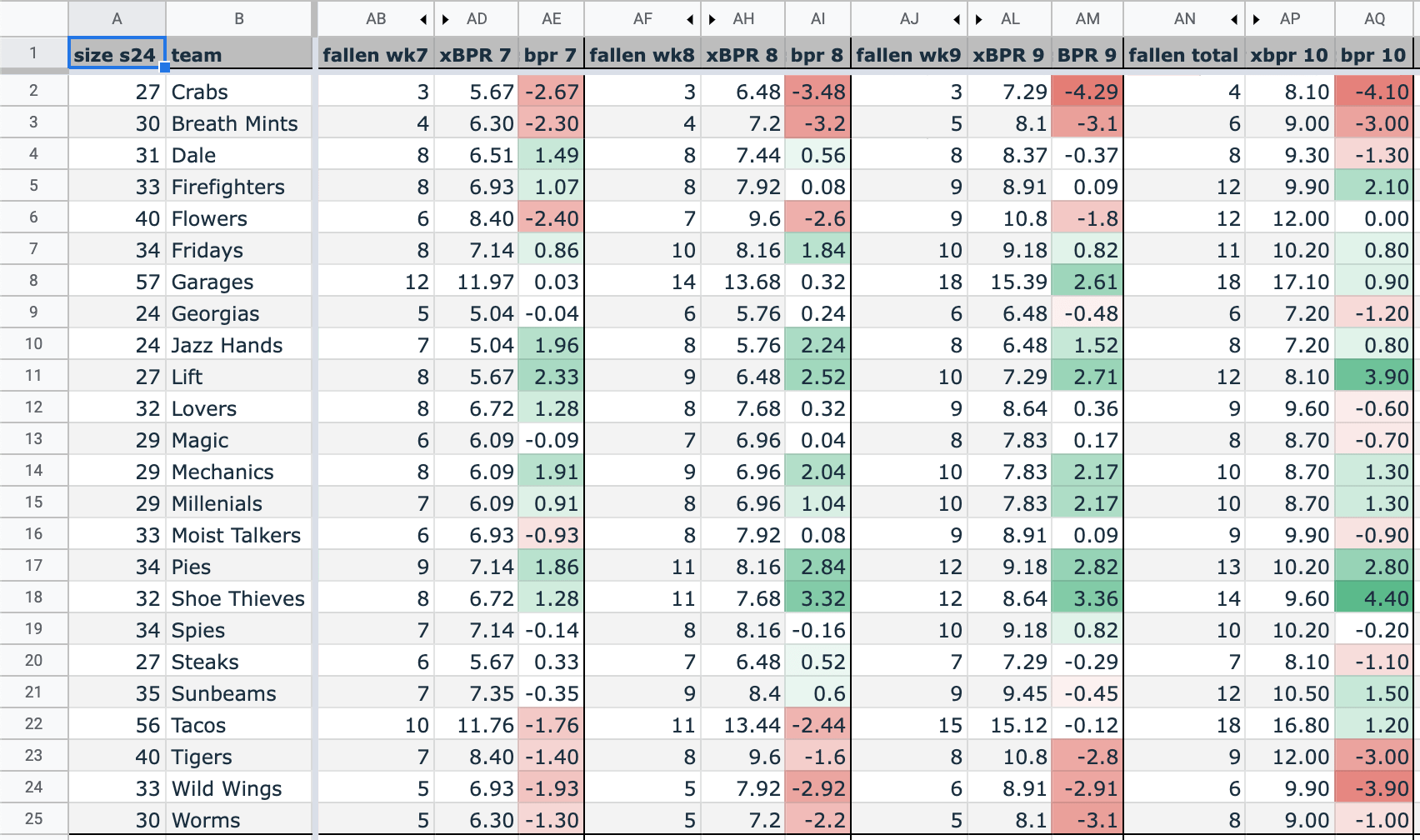 (Table showing how many players from each Season 24 roster would be expected to fall if distributed evenly versus how many actually fell, courtesy of Lucien on the SIBR Discord server.)

How good were the players who fell?

As of this article’s writing, we know that the old player attributes aside from Thwackability (now simply called Thwack) have been replaced by new ones. We aren’t sure if players’ Thwack will remain the same however, and it’s safe to assume that all the players will have different star totals than they did in Beta.

I see no reason not to stack the teams up by those old metrics however. 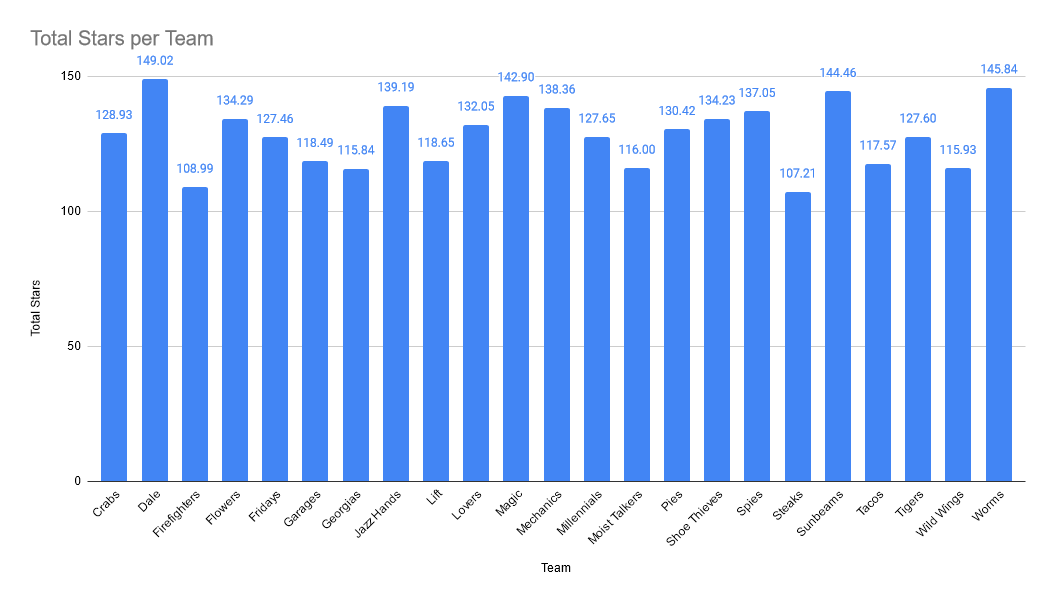 (Chart showing the total star counts of the new rosters based on player’s stars as of the end of Season 24.)

If we were to base our expectations for the first season after Blaseball returns off of these totals, we might expect the Dale, Worms, Sunbeams, and Magic to be favored for the championship thanks to their rosters including multiple high starred veterans, and for the Firefighters and the Steaks to be battling it out to see who will host party time, in large part thanks to receiving two of the lowest starred players in the league: Nerd Pacheco (Firefighters) and Agan Espinoza (Steaks) who have 1.66 and 2.78 total stars respectively.

Speaking of which, both the highest and lowest star players available in the theoretical pool of 800 players fell during Fall Ball: the aforementioned Nerd Pacheco is the lowest starred player available, and the final round saw the return of Winnie Hess, now on the Worms, who is the highest starred player at 31.44 total stars, more than twice the 12.94 total star average of all the players who fell.

How much Blaseball have these players played?

Of the 800 players assumed to be eligible to fall, 493 had at least 1 plate appearance or batter faced during Beta, meaning ~62% of players had actually played the game where we could see it, however briefly. And some of them played extremely briefly: 4 players of the 800 assumed to be eligible only recorded 1 PA during Beta, 3 of which were players in the Fridays and Breath Mints shadows who haunted Kennedy Loser after those teams were incinerated, and 1 was Archie Lampman, a Pre-History player who haunted Kennedy Loser before being recruited to the Tigers’ shadows via Ambush, ultimately to fall to the Steaks during Fall Ball.

Of the 240 players who fell, 162 have at least 1 recorded PA or BF, or ~68% of the new rosters. But just how experienced are the new rosters? To answer this question, I added up the total PA and BF of the players on each team. For players who debuted during Seasons 1 or 2, which SIBR’s Datablase has no record of, I used the same method the Hall of Fame project used when determining if players reached their cutoff for eligibility: 4 BA per game for batters, 36 BF per game pitched for pitchers. For simplicity’s sake I gave an even 396 BA to every batter and 720 BF to every pitcher who debuted in Seasons 1 or 2 regardless of whether they replaced an incinerated player in Season 2 or not. In the only place where teams were close enough that it might make a difference, Simon Haley’s extra PAs could not prevent the Moist Talkers from being the least experienced team in the new era.

(Chart showing the total number of plate appearances and batters faced by the new rosters of the main 24 teams.)

Pitchers tend to have a much higher BF than batters have PAs, so partially this chart represents how many career pitchers have fallen to your team. Notably, the Dale and Fridays, the two teams with the most experienced roster, have Dunlap Figueroa and Sexton Wheerer on their roster, who are the 2nd and 3rd highest in BF, and this does not even include Sexton’s career as a batter, making Sexton Wheerer the most experienced player in all of Blaseball with a total of 26,383 PA+BF.

What this chart also represents is how many players on each team haven’t stood at the plate or thrown a ball even a single time, or if they have seen play, barely saw any play at all. The Wild Wings’ new roster only has 3 players who have ever played the game: 7 of their players have 0 recorded PAs or BF. The Georgias’ roster isn’t far behind with 6 players who have never played the game, but just barely: Kit Ratoon has only 21 PAs. With exactly 21 less PA+BF than the Georgias, the Moist Talkers’ roster has only 3 completely inexperienced players, but 3 of their other players have less than 200 PA+BF each, clocking in at 21, 81, and 123.

Such an uneven distribution of experienced players isn’t unexpected given the random nature of Fall Ball, but it does mean that some teams are sorely lacking in the “fan favorite” department. The Wild Wings, Georgias, Breath Mints, Moist Talkers and Tigers especially seem to have gotten the short end of the stick in this regard, all of whom are on the low end on receiving experienced players to their roster in addition to having less players fall from their s24 roster than would be expected if the players were distributed evenly from those s24 rosters by relative size.